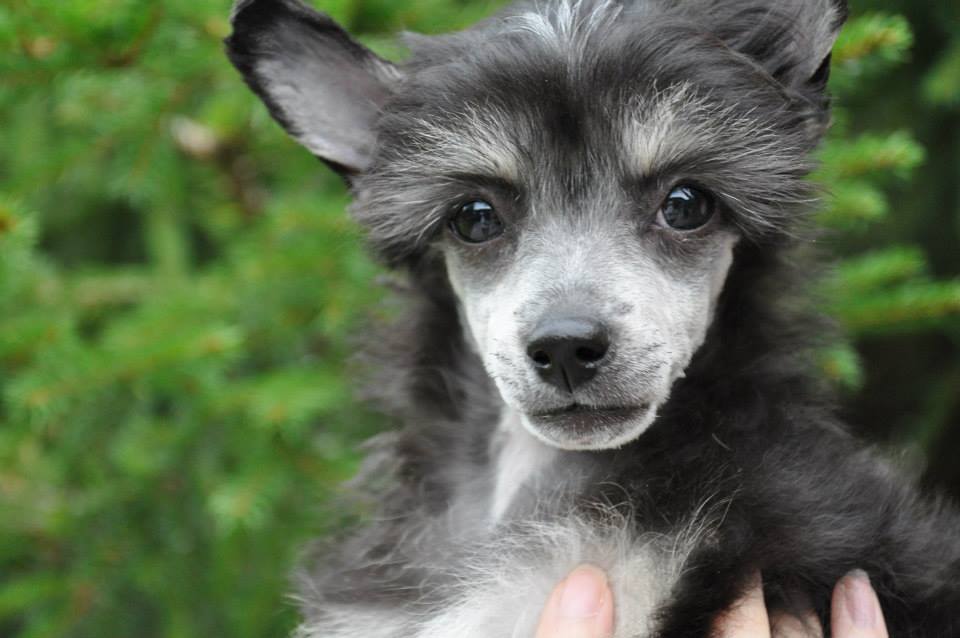 Kelly came from the Swedish breeder, Kennel Sookie's. She is a lovely puppy, alert, playful and very eager to get treats. She is registered as black and tan even if her tan is a very bright shade. Her best friend at our residence in one of the cats.
She got her name from Grace Kelly.

Early this year around the Easter of 2015, she started showing some symptoms of pain in hear rear end. At first I thought that she had been playing too rough with the pack, and she seemed to get better. Then the symptoms came and went, over a period of time. When I finally took her to the vet for an x-ray, my worst fear came true. She got CLP (Calve Legg Perthes) as the diagnosis for her left hip. As this is a disease and not an injury, it soon became evident that I could not use her for breeding. Still, as the sweetheart she was, I wanted to keep her. She was a part of the family, and even if she couldn't be bred, she could still influence puppies and the other dogs in the pack. And she deserved a chance.

I got redirected to one of Norway's best experts on the disease. At the consultation it became clear that we had a rocky road in front of us. There were a few possibilities as far as an operation goes, but they were noe the best of alternatives. Kelly was small for the breed, and even the smallest of the best hip prosthesis' was too large for her bones. The alternative was, in my simple words, to saw off the top of the leg bone and that a "false joint" would be created. We got pain killers and the order to swim as much as possible to strengthen her muscles before her operation. That was the plan, and it was executed during the summer of 2015. Ever so sadly, it was not enough. The plan did not work. Her pains became too severe and the muscles were deteoriating, in spite of the swimming. It really took a toll on Kelly's mentality as well as she became more and more reserved, both for the other dogs, but also for making movements.

The one dog she always felt comfortable with, was my male Raio. When one laid down, the other laid down next to the other. The were best friends in the pack, maybe because they understood each other's pains. Kelly, escpecially, was very dependent on Raio and when his and her health were deteoriating, pains increasing and mentality changing for the worse - it felt right to let them go together. To imagine Kelly go though months of recovery, keeping still for weeks and months...it just didn't seem fair to her. As one of his best friends in the pack also had a life-thratening diagnosis, I made the choice to let them travel to the other side - together. They were so dependent on each other and it felt "right" in a way. I will always remember them for the wonderful dogs they were.

Kelly taught me so much about the breed, about health issues in the breed and about how to groom a puff, just to mention a few things. Most of all she became a role model for me as far as mentality goes - when she was in good health she was the most wonderful, happy, energetic little bundle of joy that ever set paws in this house. God, how she was a sweetheart! Thank you, Kelly!